Informal use of SpotWalla as a tracking tool for event organisers – a post-mortem.

Following on from the NZ Distance rider’s NI1600 event, held in October 2019, it’s worth a bit of a review of the use of SpotWalla during the event, as a tool for the organisers and riders. – I’ve felt this is necessary as there were a number of things learnt from that event which I think we can build on to make things work better, and for this to be more useful for future events.

Our setup / a bit of background

I stepped in to help the NZDR crew with a couple of things before the event, sorting out using SpotWalla in some form of official capacity (the first year we’ve tried this) was one of those areas.

SpotWalla is a free, web based service provided by a Long Distance rider in the USA, for use by others around the world, to track individuals, and optionally to bring those individuals together into event based groups. SpotWalla is free for the individuals to use, and they also do not currently charge anything for event organisers to create a group, into which individuals can opt-in. These groups are called ‘Location Pages’, and an administrator for each location page is capable of setting various options up for the page, including the join / view passwords, whether speed details are shown, for what range of dates the pages remain active etc.

For our NI1600 and NI800 events we requested two location pages from SpotWalla, they were happy to help out and delivered these to us with around 4 weeks to go before the event.

The reasons for setting this up, and to request riders to get involved in this were:

When it came closer to the weekend, through the Facebook group, and via email, we notified the riders of the intention to trial SpotWalla in the event and invited people to read through a detailed blog post on how to set themselves up with a SpotWalla tracking app, and then also join into the relevant Location page. I made myself available to help during those weeks, and anyone who struggled with this was free to call me and request assistance.

In the lead up to the event, we were collecting riders into those Location pages, and together were able to see the accumulation of riders before the event, all in our ‘home locations’.  – It was actually quite a lot of fun (personally), watching those tracking flags descend on Turangi for the weekend. 🙂

During the briefing night, there were about three riders who needed some further assistance to get their tracks refreshed and working again. A number of others were keen but had left it a little late to get involved for 2019.

In the end we had 2/3 of the NI1600 field, just under 20 riders, and just over 30 of the NI800 field running SpotWalla tracking on the day. While this didn’t cover the entire field, it did provide a reasonable indication of where people were. – Or it did, while the trackers were running. 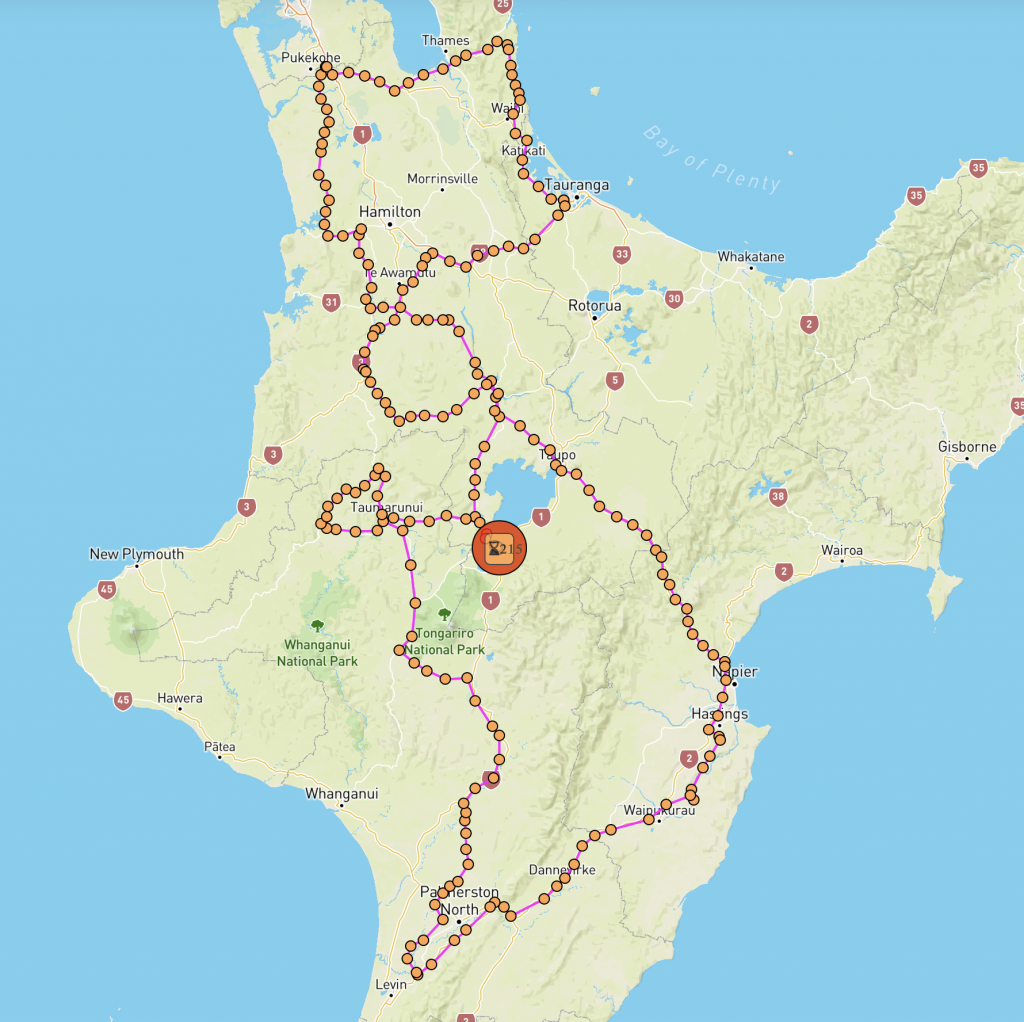 The NI800 riders set-off first, and being one of them, I know from looking at the tracking web page as we were riding round, that it worked pretty well. Certainly the head of the field had good solid results and very few trackers dropped off entirely. 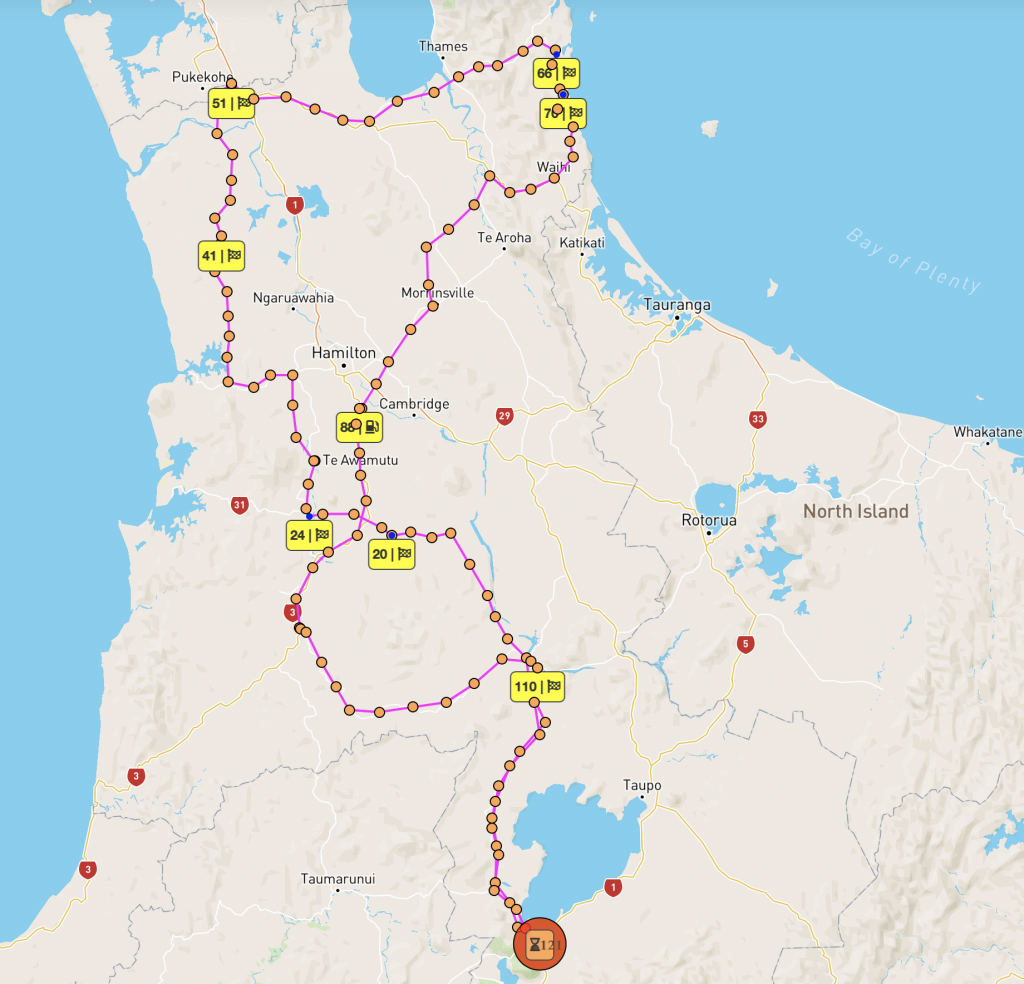 This might be because of the Double Badger, and for the first year a lot of pretty serious LD riders opted to do the NI800 ride as the first of their two Double Badger rides. It also happens to be those riders who tended to end up at the front of the NI800 pack throughout the ride. It’s also these guys who run SpotWalla already, and perhaps have more experience of what’s required to keep the trackers running, and are also best setup on their bikes with Auxiliary charging power supplies to their phones etc etc…

The NI800 ride is half the overall distance and time of the NI1600 ride, and so arguably, there’s less stress / strain on the cellphone battery life during that event. Also we were generally pretty lucky with the weather, and so we didn’t have to contend with cellphones or charging plugs getting wet etc.

In my view the NI800 ride views were fairly solid.

This feedback from one of the organisers:

It’s a nice addition, it is not reliable. Be it rider equipment, coverage or the system, there was a mixture of working well, not working at all, randomly working for periods, some didn’t work in the beginning, others stopped during the middle and others stopped towards the end. Some also started after not working. Compounded by internet connectivity issues, it added admin overhead keeping it working, messing around with wireless connectivity, but was a really good addition for spectators.

Ok, so from that feedback, we missed the mark quite a bit. So let’s break that apart a bit…

Issues which were experienced

I have to start by saying that I wasn’t present in HQ throughout this event much at all. – Only before the event, briefly at the end of my own NI800 ride, and then again in the Sunday morning for breakfast and a couple of hours…

One of the major issues which I noticed first hand was just general internet access and page loading issues, both the speed of page loads, and the stability of the connection were, to be honest, woeful. A decent internet connection is the very first prerequisite for an online system like this, and it’s perhaps hard to judge other aspects of the service, if your general access to it, itself is unreliable.

So, that becomes the first recommendation for changes; a better connection for HQ.

Additional admin overhead: this is almost exclusively caused by a crappy underlying internet connection. – You can keep those SpotWalla location pages open and running for days if the connection permits it. And generally speaking the SpotWalla service can cope with a significant amount of traffic as it copes with the IBR every two years. – I think that if the internet connection is improved then the admin workload will be minimal.

Unreliable trackers: some coming in, some dropping out, some simply not working at all… The SpotWalla service relies upon each individual tracker being correctly connected and capable of sending in regular location updates (messages). If the SpotWalla page is working to show *any* of the riders, then there’s a very good chance that a missing, stopped or failed track for an individual is down to the individual unit and not the main system.

In general terms, I believe we have to assume i) that the core system was up, running and responsive for the whole time and that any access issues were caused by local internet connection issues, and ii) that any unreliable trackers were down to the individual units, the setup, the current running of the app, the location services, their cellular connectivity etc. – All individual and device specific issues.

It’s unlikely that we’ll ever get all individual’s to contribute 100% successful tracks. And while it’s not mandatory to do this, and to keep them running, there’s little motivation for riders to do anything other than ‘try’ when they’re out there riding. In some longer events overseas there are ‘bonus points’ awarded for keeping trackers running, and in some cases, if there have been no updates for a while, then HQ will call a rider to check in on them. – That’s never going to be the case for NZ events, partially because very few of us run Satellite based tracking units, we’re far more cell-phone based, and for us, when we go into any of the Gorge sections of the North Island, we can expect our tracking points to drop out, for up to an hour!…

Anyway, as long as it’s not creating too much hassle or headaches for people to continue to try this, then I believe it’s worth it, the organisers have today indicated that they would like to continue to use this into next year’s event. So, please take this as an encouragement for you (as a rider), to get out on your bike between now and then, and to become more familiar with SpotWalla, and how to use it to your own advantage.

I know that Wayne, who organises the TT2000 event, has already expressed an interest in trying to get some riders in that event contributing their locations into a shared page too, so that might be another step in the right direction for people becoming more familiar with how to use things. 🙂